Before I’m able to get the first question in, Daniel has already asked me about my IM screen name. As I embarrassingly begin to explain its connection to my childhood his internet connection is lost. This isn’t a good start. But once he’s back I dispense with the pleasantries and dig right in: are writers too busy trying to make the next stereotypical blockbuster or rom-com or is there a genuine drive towards more original, more artsy films? 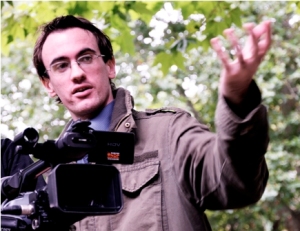 Indeed, so many Hollywood films these days seem to be sold in a “if you liked that, you’ll like this” brand. My personal evidence of that are the rumours of Matrix 4 and 5 and the pre-/sequels to Blade Runner. But Daniel is less cynical than me and says it’s more about finding a balance between tried-and-tested and adding your own zest:

“I write in a very specific way, and it’s influenced by a lot of people whose work I admire. But I’d like to think it’s original, you know? If I wrote to stereotypes, if I was less original and myself; I’d have an easier time having a career!”

No doubt people know what they like and Hollywood executives like to think they know what will sell. A lot of people are comfortable with stereotypes, whether they are to do with the plot, story, culture or the characters. Widely-held stereotypes are ‘safe’ – most people are capable of understanding and agreeing with them and this makes the watcher feel like they know what’s happening and that they are a part of it. I want to know whether Daniel thinks this is good for writers and good for watchers.

“The characters we see on the movie screens don’t represent all the people, and they stereotype and marginalise all sorts of groups and whatnot, but to be the filmmaker – to change that – is hard. It’s happening more and more in smaller films, but it’s difficult. Hollywood films are, generally, about pleasing a lot of people, about making a ‘product’ that will do well, or at least, they hope so.”

So, as a writer it’s often difficult to be different – to swim against the mainstream. What about his work? His new film, Side By Side, is primarily about the effect of a serious illness (in this case breast cancer) on two people’s relationship. Daniel is under no illusions.

“Cancer is a serious topic and it needs sensitivity and realism and I think my film definitely has that. I’m still re-working a few bits of the script and I have some nurses working as consultants on it, advising me on anything that isn’t realistic or believable.”

The drift, I think, is that this isn’t a procedural medical drama. It’s not about the diagnosis but the people it affects. It’s not about cancer but the emotions of going through it all and getting support from the person you love. After all, it’s not a documentary but a work of fiction. 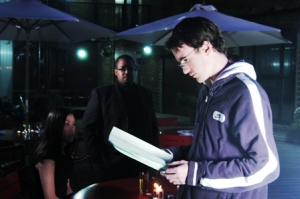 “A few years ago I went to a great screening of a film called The Band’s Visit – by a director called Eran Kolirin. There was a Q+A and someone asked the director if his portrayal of the Egyptian police was realistic. He said, “Who cares, it’s fiction! This is my world!” and I really loved that.”

I’ve known Daniel for a few years and it’s always struck me that he knows a lot about films and that he is passionate about them and so when he said a couple of weeks ago that he had nearly finalised the cast, I knew that he would be excited about it. So how did it go?

“The first actor I cast was Camilla Arfwedson. I didn’t audition her; I just knew she had to play the part. I was a production assistant on a film, about 6 years ago, and she was in it, I was knocked out by her talent and professionalism. I sent her the screenplay and she agreed to do it immediately.”

A dream start. Camilla Arfwedson is a talented actress of both screen and stage but still relatively unknown. She has had supporting roles in The Duchess and Marple and one feels that the leading role as ‘Lisa’ in Side By Side could finally be the break she needs. Daniel, clearly, feels he made the right choice. But what about our leading man? Was it just as easy?

“The lead role of Paul we really struggled with because it’s so hard to get right; this is a character who runs a thin line between being a sensitive, loving guy and an infuriating man who won’t commit to the things in his life. Finding someone who can be both, at once, is tough.”

Daniel took a relatively long time to cast the role of ‘Paul’, waiting to find someone who had the right chemistry with Camilla – and the script. Eventually, he cast Sam Phillips to play the role. Sam finds himself in a similar boat to Camilla – young but experienced: teetering on the brink of a big break. Arguably, his most successful role so far has been as a regular on the successful BBC children’s TV show Hotel Trubble, which has just been renewed for a third season and has featured some prominent guest stars, including Miranda Hart. So how was the process?

“We auditioned a lot of people and then, a few weeks back, Camilla called me up and said I had to come see her in a play she was doing because one of the guys in it would be perfect for the part. So we went and saw him, read through with him and Camilla and he was perfect for it.”

“Camilla and Sam came off the stage; they were doing The Merchant Of Venice, in Derby. They came out to meet us, we met Sam, and then we did a read through and filmed it.”

I didn’t ask whether he offered him the part right there and then, I didn’t think I needed to. The important thing was that Daniel had found someone who could work well with Camilla and was a convincing ‘Paul’. With Camilla finding her own co-star, there’s almost poetry to it – a romance, if you were, noteworthy considering the Portia/Bassanio relationship they play on stage.

Fundraising is another area he has experienced difficulty with. He has made numerous short films before – all of them on a shoe string budget – and this is the first time that he’s had to try and secure serious funding. He’s quite dismissive of funding bodies, with good reason he argues, as he has never had much luck with them and he doesn’t know anybody who has. Side By Side is a different kind of movie and as such doesn’t fit into the cookie-cut genres of ‘horror’ or ‘rom-com’, for example. But he’s optimistic, taking advantage of a clever initiative on the Internet.

“Films like this always struggle but we’re doing okay, we’re getting there. Part of our fundraising is through donations, and credits, on IndieGoGo (http://www.indiegogo.com/Side-By-Side-1).”

The idea is that people give what they can towards the project, whether it is a few dollars or a few hundred. In exchange, people get benefits ranging from a personal thank you up to an Associate Producer credit on the movie. Daniel says that this helps make sure that the project gets its funding, people get the warm feeling of knowing they are helping to make a film and Daniel gets to keep control of the project. “The bigger the budget,” he says, the more it gets “hacked together by people in expensive suits.”

Funding the project through internet micro-donations was the idea of Daniel’s producer, Steven M. Smith. Daniel’s keen to highlight that Steven has been a big help for him and the project.

“Steven is great because he trusts my talent, and judgement. We disagree a fair bit but it’s for the right reasons – we’re trying to understand each other and to do what we need to do to get the film get made. But he’s a big support, and the film is being made through his production company, which takes a lot of the pressure off of me. “

Steven is no newcomer to the scene. As Daniel points out, he has his own production company and he has experience from many different perspectives in film making, whether it is as a writer, director, actor or producer. The optimism doesn’t stop there either; when I ask him about the future he says it’s always been his dream to make a feature film and if Side By Side goes well, he’ll be making more.

“It’s always been the dream … the things I am interested in are: character, emotion, relationships between people – you can’t really explore those in short film. The goal is to be writing and directing feature films. I am lucky in that, the types of stories I like to tell are ones that can be budgeted modestly. I like Woody Allen films and Billy Wilder pictures; it’s more about the people than the aliens.”

What about Side By Side? The plan is to get it screened at a major film festival and hope that it can replicate the sort of success enjoyed by other low-budget films like Once and The Puffy Chair. But when’s the release date? Whenever a film festival schedules it, he says. So when do you start filming? Whenever the script’s ready. I suspect that it’s not because he is disorganised or unmotivated but because behind-the-scenes he is furiously rewriting and reimagining scenes. He wants it to be perfect and to him you can’t force a film to resonate with people. It’s Daniel’s respect and passion for a good story with well crafted dialogue that make his films so delightful to watch. Daniel wants to know things about people – just like he did with my screen name – and tell stories without pretence or arrogance. This is why he has a loyal and humble following. I suspect Daniel revels in this – or at least he would, if he wasn’t so focused on finding and telling stories.

Daniel Johnson is the writer and director of the upcoming film Side By Side, which is being produced through Greenway Entertainment. People interested in getting involved should visit the Facebook page: http://www.facebook.com/pages/Side-By-Side/157048280972791 or the IndieGoGo page: http://www.indiegogo.com/Side-By-Side-1.